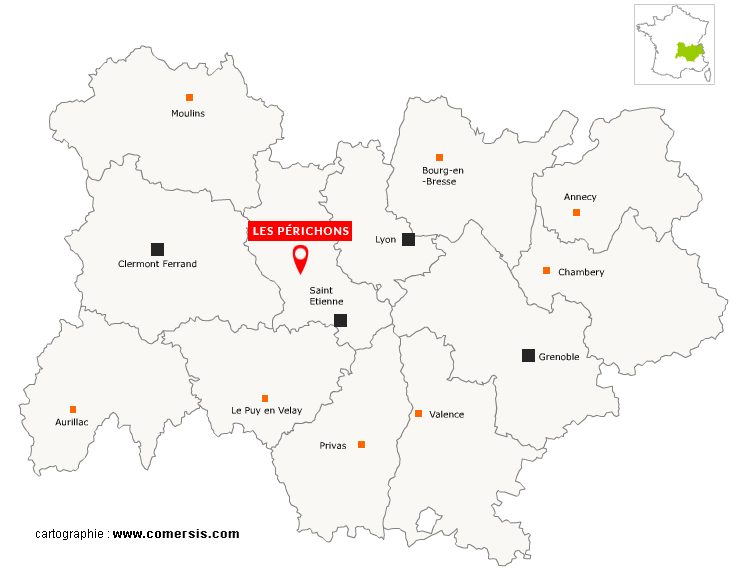 In the heart of the Forez à Sander plain, a few kilometers from Feurs, Montbrison, St Etienne… the Château des Perichons is nestled in the heart of nature, in a privileged and ideal environment to relax. In the sand, pass in front of the Town Hall, turn right towards Montverdun, cross the bridge of Vizezy, always straight. At the end of a large straight line, you will see on your right the castle of the Perichons. Turn right on the Périchons road, pass past the Castle and Park in the parking lot located at 155 of the road.

To have an idea of how much kilometers seperate us !

Feurs is located in the heart of the plain of Forez, in the department of Loire (42). It is the former historic capital of Forez to which it gave its name. It welcomes more than 8000 inhabitants. 7.2 Km separates us.

Montbrison, historic city mentioned since the end of the eleventh century, is considered the historic capital of Forez and has more than 15,500 inhabitants. From this prestigious past, the city retains an important heritage, of which the Collegiate Church Notre-Dame-d’Espérance is the most imposing illustration. Montbrison is, with Roanne, one of the two sub-prefectures of the Loire department. It is 20 km from the Château des Périchons.

St Etienne : With 171,924 inhabitants in 2016, it is the 13th most populated city in France2 and the 2nd largest municipality in Auvergne-Rhône-Alpes. Long known as the French city of “weapon, cycle and ribbon” and a major coal mining center, Saint-Etienne is currently engaged in a vast program of urban renewal to lead the transition of the stadium city inherited from the nineteenth century to that of “capital of design” of the twenty-first century. 46km from the Château des Périchons

Roanne. For many years, the name of Roanne resonates throughout the world as a high place of gastronomy. But this pretty city, nestled along the Loire, has not finished surprising you with its old center with southern accents, its charming little port or its fashion and textile creation. 46.6 Km from the Château des Périchons.

This website uses cookies to improve your experience while you navigate through the website. Out of these, the cookies that are categorized as necessary are stored on your browser as they are essential for the working of basic functionalities of the website. We also use third-party cookies that help us analyze and understand how you use this website. These cookies will be stored in your browser only with your consent. You also have the option to opt-out of these cookies. But opting out of some of these cookies may affect your browsing experience.
Necessary Always Enabled
Necessary cookies are absolutely essential for the website to function properly. This category only includes cookies that ensures basic functionalities and security features of the website. These cookies do not store any personal information.
Non-necessary
Any cookies that may not be particularly necessary for the website to function and is used specifically to collect user personal data via analytics, ads, other embedded contents are termed as non-necessary cookies. It is mandatory to procure user consent prior to running these cookies on your website.
SAVE & ACCEPT